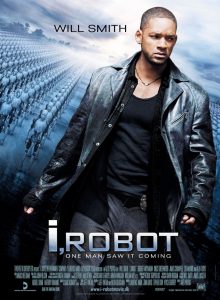 My first job after college was I, Robot.  I was super excited to work on this film, it really was a dream come true.  I started as an intern in January, 2004. After my internship, I was hired as an animator and animated my first film shots.  I did the “Fed Ex” bot (the first robot shot in the film!), as well as the NA4 that saved our hero from his drowning car, the NS5 sitting in the doctors house, as well as the mechanical animation of “Sonny” opening up, some straps, a lot of roto-mation for shadow passes, and for Will’s robot arm at the end of the film, a flying nanite syringe, and I even separated the AI file of the image of the bridge that Sonny draws, into horizontal and vertical lines! It was a blast.

I’ll upload my shots here at some point.